ACH Volley Ljubljana to second win in less than 24 hours 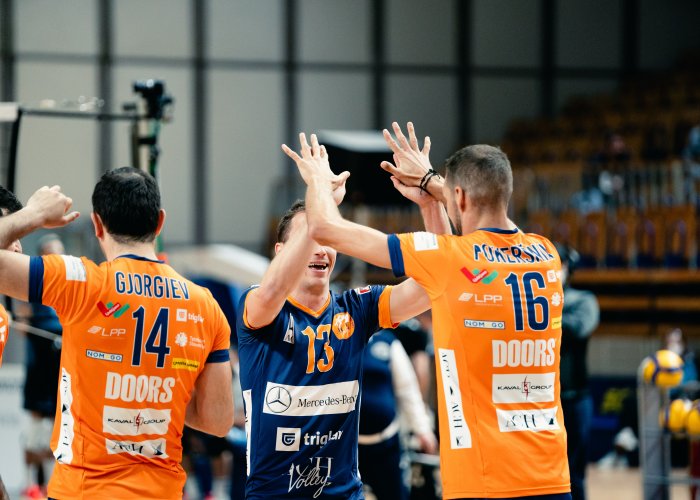 In the 8th round of the Sportklub Volleyball First League, ACH Volley Ljubljana and Panvita Pomgrad competed for the second time this season. A tough pace and the second match in less than 24 hours and the fifth match in ten days did not prevent the Ljubljana volleyball team from triumphing again.

The start of the match was marked by the guests from Murska Sobota, who with an excellent block and strong initial shots surprised the favoured Ljubljana players and led with the score 7:1. The home team's strategist Kašić reacted to this and called for a minute's break. This did not stop the onslaught of Panvita Pomgrad, who continued their impressive game and maintained their lead (3:9). ACH Volley Ljubljana's volleyball players were also becoming more and more awake, as they improved their efficiency in attacking finishes and started to serve better. At 9:12, the Orange Dragons' onslaught was interrupted by Panvita coach Fujs with a one-minute break.The guests managed to escape again after Lakner's difficult initial shots (11:15) and they maintained this advantage in the rest of the set (13:18).  Despite the big deficit, the Ljubljana players rallied and started to steadily melt the advantage. After an ace and a successful finish by a determined Gjorgiev immediately afterwards, the Orange Dragons managed to erase the deficit on the 22nd point. The Ljubljana volleyball team finally managed to turn the tide in the playoffs, winning the opening set (25:23) after a successful finish by Mašulović.

This time, ACH Volley Ljubljana entered the second set much better and quickly took a four-point lead (5:1). This triggered a reaction on the bench of the guests from Murska Sobota after a minute break, but it did not stop the home volleyball team from improving their lead (8:3). The visitors quickly got closer to the Orange Dragons, only a point behind (10:9), but the multiple national champions had an answer to that. First they led by four (15:11) and then by an unassailable seven points (19:12) after a series of successful initial shots by the playful Okroglič. Too many unforced errors crept into Panvita Pomgrad's game, which led to a smooth victory for the Ljubljana players in the second set, which ended after another error by the guests (25:18).

The opening of the third set also went according to the notes of the home volleyball players of ACH Volley Ljubljana, who led 5:1. This time the guests had an immediate answer and cancelled the advantage of the Ljubljana volleyball players (5:5). However, this was the only tie in the third set, as the Orange Dragons dominated the court and took matters into their own hands. They controlled the game throughout and entered the final set with a big lead (23:16). After an error by the visitors, the third set ended in favour of the Ljubljana players, who thus achieved their 8th consecutive victory in the national championship.

Statement of ACH Volley Ljubljana coach Mladen Kašić: "After yesterday's away game in Graz, the legs were heavy today. This was also shown by the start of the match, where we didn't play with concentration. We showed that the team has character in the rest of the match, when we were getting better and better. Now it's time to rest a bit and prepare for the next matches that are coming up."