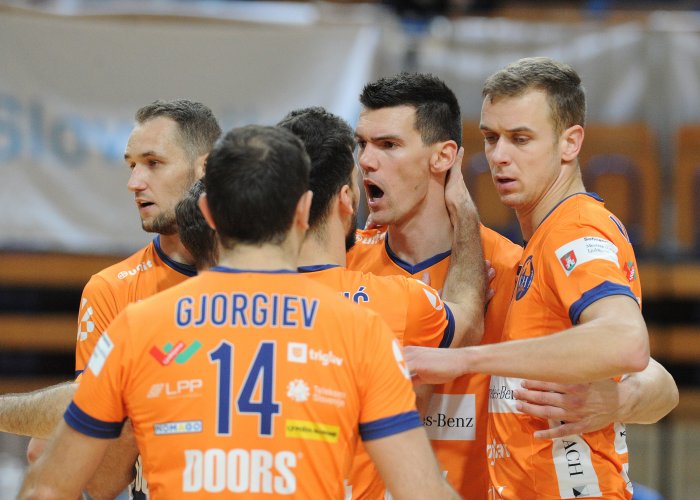 The first match of the Slovenian Cup quarter-finals was played in the orange nest of Hala Tivoli between the home team ACH Volley Ljubljana and Hiša na kolesih Triglav. In the first half of the battle for a ticket to the final tournament of the above-mentioned competition, the volleyball players of ACH Volley Ljubljana were more successful and thus recorded their 16th victory of the season.

The start of the match was even, as neither team managed to gain a significant advantage. The Kranj team was the first to do so, taking a two-point lead (5:7) after a successful attack by Pušnik. The Ljubljana team quickly responded and managed to tie the game with an initial shot by Todorović, and immediately afterwards took the lead (10:8). Šket, who was the main offensive player for the home team, was too much of an obstacle for Hiša na kolesih Triglav team. The guests from Kranj, despite the fact that not everything is going according to plan this year, did not let the favoured ACH Volley Ljubljana volleyball players gain a significant advantage in the first half of the set and were breathing down their necks (15:14). The Orange Dragons only managed to pull further away after a series of Mašulović's serves (17:14), followed by a reaction on the visitors' bench and a one-minute break. It did not stop the onslaught of the Orange Dragons, who led by four points (19:15) after another successful attack by Šket. Immediately afterwards, Todorović followed up with a series of successful serves and the resisitance of the guests from Kranj was finally broken (21:15). The opening set ended in favour of ACH Volley Ljubljana (25:18) after a mistake by the guests.

The second set was much better from the very beginning and the home team took a three-point lead (5:2). The Orange Dragons added more pressure through the initial shots and with a good block game they led by five points (8:3). Visiting strategist Rop tried to change the game with a minute left, but the difference in quality on the court was clearly visible. Similarly to the opening set, Todorović caused problems for the visitors on the opening hit, leading the team to another maximum advantage (14:6). The rest of the set was also on ACH Volley Ljubljana's terms, as they took a 2:0 lead in the set after an ace by the most efficient player of the match, Kök.

Similarly to the second set, the Ljubljana players entered the third set with a commanding lead and quickly went up by four points (5:1, 7:3). After two aces by Kök, who, in addition to his initial shots, also impressed in attacking finishes, the Ljubljana volleyball team's advantage was already an unassailable nine points (16:7). Thus, there were no doubts about the winner of the first match of the quarter-finals of the Slovenian Cup. The Orange Dragons successfully finished the third set after a service error by the guests and gained a nice advantage before the return away match on December the 15th.

Statement of ACH Volley Ljubljana coach Mladen Kašić: "Despite the fact that the Triglav team is in last place in the championship, we had to enter the match fully focused and with a clear goal to prepare as good a starting point as possible before the return match away. We managed to do that, and I congratulate the boys for that."