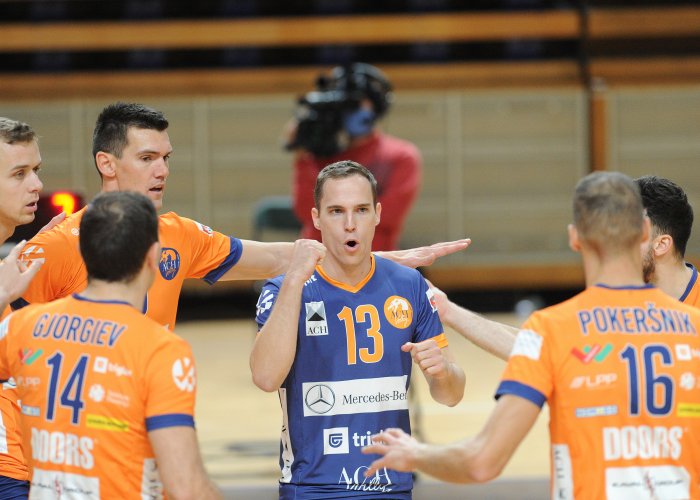 In the derby of the 5th round of the Sportklub First Volleyball League in Maribor, we watched the duel of two undefeated teams, which also counted for the Central European League MEVZA. After the opening set of victories, the volleyball players of ACH Volley Ljubljana rallied and won their eighth consecutive match of the season.

ACH Volley Ljubljana players had a better start to the game after a successful attack by Šket, a Maribor player last season. After an excellent attack by Rutar, the guests gained a two-point advantage for the first time (5:7), which melted away as the Merkur players became more and more playful. After an ace by the determined Ihbajri, the home players took a two-point lead, which triggered a reaction on the Orange Dragons' bench and a one-minute break at the request of coach Kašić (13:11). The current national champions, with a good game especially in the block and defence, caused problems for the unrestrained ACH Volley Ljubljana volleyball players, who were rather slow (18:14). The Orange Dragons woke up a bit later on and after a successful attack by Gjorgiev, they reduced the deficit to two points (18:16), which meant a one-minute break for the hosts. It bore fruit and Maribor stopped the Ljubljana attack and increased the lead to an unassailable five points (23:18). The set ended in favour of Merkur Maribor (25:21) with a successful attack by Donik.

The second set was again opened better by the Ljubljana team with an ace by Šket, who led by two points (2:4) after a successful block by Mašulović. This did not confuse the still playful Merkur players, who were sovereign in their offensive actions and played with few errors of their own. After a real marathon point, which was served with attractive moves on both sides and ended in favour of Maribor's volleyball players, the coach of the guests, Kašič, intervened after a minute break (9:6). The Orange Dragons woke up and after powerful initial shots by Šket, they tied the score at 10. However, the pace of the game was also picked up by the Mercury players, who, on the wings of the skilful Hungarian receiver Georgye and Ihbajri, followed the guests from Ljubljana, and the two teams entered the playoffs tied (21:21). After a successful attack by Okroglič, who replaced captain Pokeršnik in the second set, the Orange Dragons took a two-point lead (21:23), which did not bring a peaceful end to the set. The struggling hosts defended the first, but not the second, final ball, which was scored by the increasingly playful Šket with an ace for a 2:1 lead in the set

In the opening of the third set, we watched the serial national champions play better and better, taking the initiative on the court and quickly taking the lead (2:5). On the side of the Orange Dragons, the Macedonian Gjorgiev, who was playing with strong initial shots and also finished attacks, gave the Ljubljana team a big lead (2:7). Maribor more than obviously let up on the opening kick and indulged in a large number of their own mistakes. The opposite was true for the Orange Dragons, who caught the right rhythm and after an ace by Videčnik were already 8:15 ahead. The Ljubljana players did not let up and kept up the pressure on the opening shots, successfully counter-attacking and dictating the rhythm of the game throughout the third set. The set ended on the 15th point (15:25) with another error (touching the net) by Merkur Maribor volleyball players.

Similarly as in the first two sets, the fourth set started evenly, with neither team gaining a significant advantage. The Orange Dragons quickly moved into a four-point lead (7:11) after another excellent serve from Šket. The 33-year-old from Bistrica was going point for point and was an unsolvable puzzle for the opponents from Maribor. After a successful attack and an ace by Okroglič, who brought a new wave of energy into the Ljubljana team's game, the advantage was already a huge seven points (10:17). The Orange Dragons managed to completely stop Maribor's strongest weapon on offense, the 24-year-old Ihbajri, who was replaced by the young Adžovič after a new block (11:20). After a block by Pernuš, who came in for Todorović in the second half of the set, the lead was already an unassailable eight points (13:21). The Ljubljana volleyball players kept their composure until the end and won convincingly (17:25).

Statement by ACH Volley Ljubljana coach Mladen Kašić: »We started the match nervously and without energy, which was also visible in the result of the first set, which was deservedly won by the Maribor players, especially with their incredible defensive play. After winning the second set, we finally relaxed and outplayed our opponents in the third and fourth sets, getting closer to our level of play.«

Statement by ACH Volley Ljubljana player Gregor Pernus: »We started badly and needed some time to catch the right rhythm of the game. Once we started playing the way we know how and relaxed, we won three consecutive sets and won the derby quite convincingly."