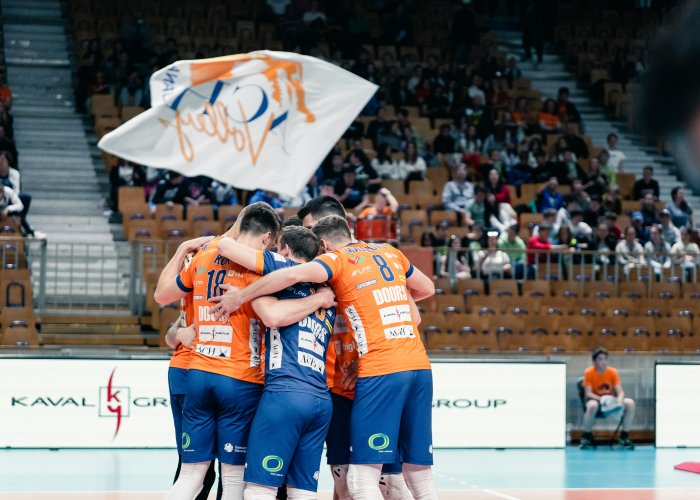 The third match of the final action of this year's men's volleyball season was played at the Tivoli Hall between two old friends of the volleyball courts, ACH Volley Ljubljana and Calcit Volley. The Ljubljana team crowned an outstanding season, in which they remained undefeated in the national championship, with a convincing 3:0 victory against Calcit Volley.

The start of the match was marked by the home players, who led 4:2 on Gjorgiev's opening shot. The playful captain of the Orange Dragons was again the best man on the court at the beginning of the match, scoring four points on his own until the eighth point (8:5). Videčnik made two blocks on Gasparini to increase the lead to a big five points, while Todorović scored an ace to make it 13:7. The Ljubljana players continued to press on the opening shot, with Šket's ace at 16:8 forcing a second timeout at the guests' request. Not much changed in the next set - Kamnik indulged in too many unforced errors and the Ljubljana volleyball team strolled to the first set, which was closed with an outstanding attack by the unstoppable Gjorgiev (25:18).

The second set started on Calcit Volley's note, as they took a 4:1 lead and continued to hold the initiative. At 9:13, coach Kašič had to take the first break, which woke up the Ljubljana players, who tied the score at 17 after two effective attacks by Gjorgiev. This triggered a reaction on the bench and a timeout at the request of Pleško. This did not stop the Orange Dragons, who significantly improved their receiving game and entered the playoffs with a minimal advantage. They only increased it to three points (23:20) at the end of the set after a block by Mašulović.  Another block by the home team meant that the Dragons won the second set (25:20).

The third set was opened better by ACH Volley players and they took a 3:0 lead on the serve of Šket. After a block by Todorović, the score was 7:3 in favour of the home team. Despite the big deficit, Kamnik players did not throw in the towel and reduced the deficit to just one point (10:9). After another effective attack by Gjorgiev, the Dragons managed to pull away again (13:10), dominated in the following period of the home floor of Hala Tivoli and marched towards a sure victory in the third set and thus towards winning the national championship title. In the final set, the Ljubljana players calmly and experiencedly brought the match to a close and convincingly won the third set (25:19).

ACH Volley Ljubljana coach Mladen Kašić: "I couldn't have asked for a better ending to a truly phenomenal season behind us. Playing 55 matches and winning 54 is something that is hard to repeat, so maybe we don't realise yet what we have managed to do this season. I have a great team and I am very proud of them."

ACH Volley Ljubljana player Alena Šket: "It was an extremely long but also very successful season, in which we won all the goals we set. Now it's time to celebrate a bit and then rest."