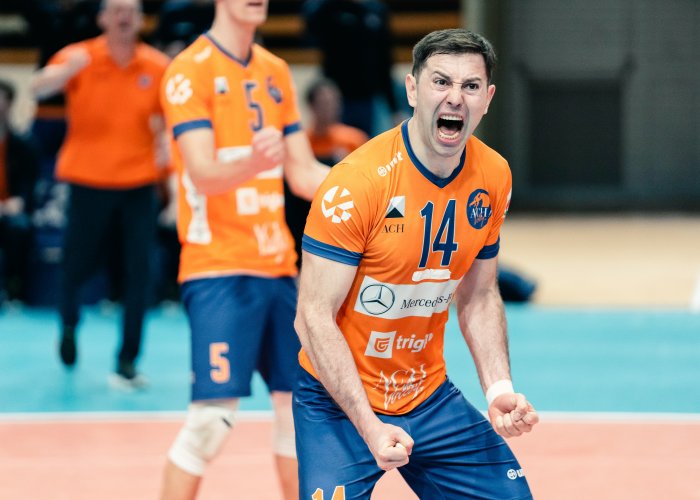 ACH Volley Ljubljana and Panvita Pomgrad played in the 17th round match of the Sportklub Volleyball League 1 at the Tivoli Sports Hall. In their third match in the last four days, the Ljubljana volleyballers recorded their 40th consecutive win of the season with a collective performance and remain undefeated.

The start of the match was marked by ACH Volley Ljubljana volleyball players, who led 3:0 after successful attacks by Gjorgiev and Okroglič and a block by Videčnik. After a mistake on the visitors' side, Vinkovič sent ball out of the court, and another block by the home team, this time successful by Gjorgiev, the advantage grew to five points (6:1). The Ljubljana players continued to score easily and at 9:3, the visiting strategist Fujs stepped in after the first timeout. The guests from Murska Sobota started to serve better and after an ace by Rojnik the deficit was reduced to three points (11:8). A strong finish by Mašulović over the first tempo put the Dragons five points ahead again (14:9). In the second part of the opening set, we continued to see ACH Volley Ljubljana dominate, entering the playoffs with a comfortable six-point lead, and Mašulović closed out the set over the midway point in favour of the Ljubljana team (25:19).

The opening of the second set was characterised by service errors for both teams. Panvita's players had the initiative until the middle of the set, applying pressure through the initial shots and after a block by Vinkovič they led by three (8:11). After the visitors' 14:11 lead, the Orange Dragons woke up, first tying the score at 14, and then taking the lead (15:14) after a successful steal by the Ljubljana team's Todorović. Gjorgiev and Mašulović scored on a successful parallel attack to give them a two- and three-point lead respectively (17:20). This was followed by a timeout at the request of the guests, which did not change situation on the court. Videčnik caused Panvita's receivers a lot of problems with his initial shots, and Gjorgiev successfully attacked to increase the advantage to 22:17. The set ended in favour of the home team with an ace by the unstoppable Macedonian outside hitter in the home team.

The third set was opened better by the guests of Panvita Pomgrad, who took a 3:1 lead, and after a block by Radovic, they increased the lead even further (2:5). Coach Kašić put Rutar and Kök on the court in the third set instead of Videčnik and Šket. After the initial deficit, the Orange Dragons quickly regained their composure and tied the score at six. After two great baskets by McConnell, the visitors were again within three points (7:10), and the home team's strategist Kašić reacted to that. This more than obviously helped the home players, who closed the gap to 11 points after an attack by Rutar. We watched an even continuation of the set, in which the Ljubljana volleyball players managed to gain a two-point advantage (19:17), but the tough guests managed to even the score. Pokeršnik, with a sophisticated shot, managed to pull the Dragons back to within two points (21:19), and after an error by Vinkovič, the score was 22:19. The Ljubljana players managed to maintain their advantage and, after an attack by Pokeršnik, won the third set, thus recording their 40th consecutive victory in the season.

Statement of ACH Volley Ljubljana coach Mladen Kašić: "The third match in four days is behind us and all praise to the boys for their approach and performance on the court. Panvita showed that they are a quality team, but we stayed focused enough throughout the whole game to win 3:0. Now it's time to fully focus on the final Mevza tournament, which awaits us at the weekend."