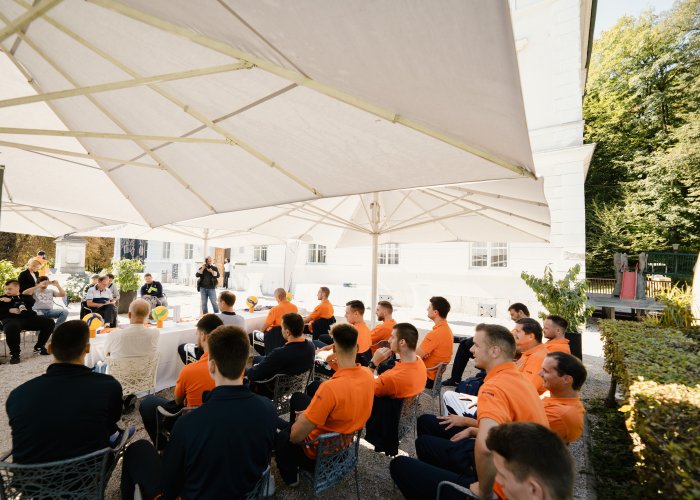 On Tuesday, 28 September, ACH Volley Ljubljana held a press conference at Tivoli Castle ahead of the start of the season, which for the Orange Dragons will begin with a Saturday away game in Murska Sobota.

Club president Rasto Oderlap, sport director Aleš Jerala, head coach Mladen Kašić and team captain Jan Pokeršnik talked about the goals for the season ahead and the structure and atmosphere of the team.

"Our goals are always domestic titles, winning the Central European League and good performances in Europe. Last year we didn't meet our goals, but we didn't consider it a disaster. It's true that we won't be playing in the Champions League for the first time in many years, but playing in the CEV Challenge Cup opens up different opportunities to prove ourselves. After the end of last season, we immediately took stock, did our analysis and started to rebuild the team and the professional staff. Within a budget of around one million euros, we have assembled a squad that I believe Sport Director Jerala and Head Coach Kašić have selected the players who will meet the objectives," said Club President Rasto Oderlap as he introduced the press conference.

The team structure was discussed by the sport director, Aleš Jerala: "We have put the team together with the new coach. He was already present at the end of last season, so he was able to watch the Cup final last year. We exchanged information for a long time and in the end we managed to bring the players he wanted and who were on our radar. I am especially happy to have the national team players Jani Kovačič and Alen Šket back in the club. I think we have a good team, a combination of young and experienced players, which will be able to deliver. The priority will definitely be to win back the national title."

Coach Mladen Kašić touched on the current state of the team, saying that he is satisfied with the players and their work so far, but that there is always room for improvement. He swears by hard work, refuses to talk about result expectations and says that with good work, success will come.

The new captain of the Orange Dragons, experienced outside-spiker Jan Pokeršnik, also confirmed that the team is doing a good job in training so far.