Champions League concludes with a winning streak against Zenit 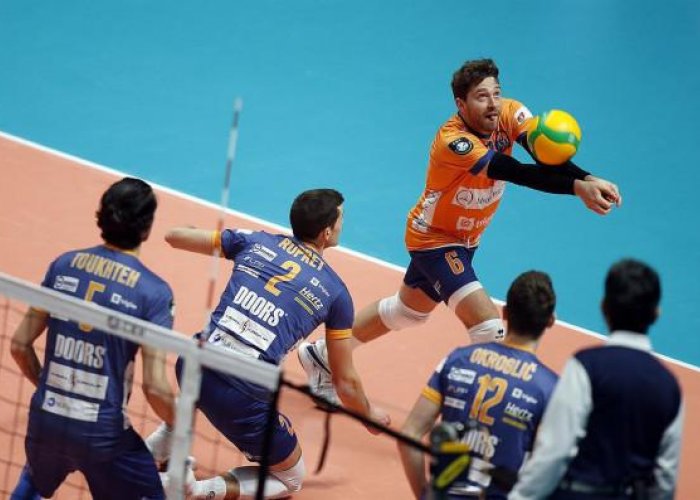 ACH Volley Ljubljana volleyball players finished their Champions League performances this year by winning the set against Zenit Kazan. The Russians played with the second line-up and won 3:1 (21, -20, 20, 20). Bozidar Vučićević was the Dragons' top scorer with 22 points.

The Ljubljana team started the game encouragingly, with Vučićević and Okroglič scoring (10:10), before a block by the Russians gave them a three-point lead (13:10). Although the hosts continued their fast pace, the Dragons got within a point (17:16) on a dunk by the Serbian opposite, but Kazan stepped up the pressure in the playoffs and took a 1:0 lead in the set (25:21) on an error by Kök on the opening shot.

The second set started as the Slovenian champions wanted. They took a two-point lead for the first time in the match (11:13) with an ace from Vučićević and extended it with efficient attacks from Kök and Vučićević (12:16). The Russians could not find an answer to their opponents' play and the Dragons, on the wings of a spirited Kök, closed the second set in their favour and tied the match at 1:1 (20:25).

The Russians rallied again in the third set and with a block and a lucky ace quickly took a 10:7 lead. The Ljubljana players were brought back into the game by Kök and Toukhteh (10:9), but the home team again led by three points (14:11) thanks to errors on the Slovenian side. Kononov's ace was followed by Surmachevsky's unstoppable shot to give the Russians an unassailable lead (21:13). Zenit closed the set with 25:20.

The scenario of the third set was followed by the fourth. The hosts of the tournament secured the lead from the very beginning and gradually increased it, but the Dragons were unsuccessful in chasing them down. In the end, the Russians were able to take full advantage in Group C, winning 3:1 (25:20) to secure their place in the quarter-finals. In the four matches played, they lost only two sets, both against the Slovenian champions. Berlin Recycling Volleys also advanced from Group C to the quarter-finals.

Matija Pleško, coach of ACH Volley Ljubljana: ''The easiest way to forget a defeat is to win. It's very hard to bounce back after the defeat we had on Tuesday. It's been a long time since we were outplayed like the team from Berlin. We didn't get the win today either, but I think it was a step in the right direction. I thought the reaction of the team today was good, but we were still not happy at the end of the game. A rival like Zenit Kazan in any kind of line-up is quite a difficult opponent. We were even better than our opponent in terms of numbers in reception and attack, but it was the individual qualities of the Kazan players that made the difference. They made 10 block points and 8 service points, while on the other hand we had only 2 blocks and 2 direct service points. Of course, I am not satisfied with the Champions League result, but on the other hand, I am trying to be at least a little bit realistic. With all the problems we have, unfortunately that was our range this year. We still have a crucial part of the domestic season ahead of us, where we are defending three first places in three competitions. We will definitely have to play good volleyball if we want to achieve our goals.''